This page details the making of my first lens. The aperture is  3 ½ inches with a focal ratio of  f/15. The objective is an oil-spaced Fraunhoffer doublet. I started the serious work on making the lens in January, 2013, though I had previously read a good deal on the subject. I thought I was well prepared. However, there is nothing like putting all the research to work with some hands-on exercise to make you realize how ill prepared you are!

I got the blanks and tools from Newport Glass Works and read the instructions on their site repeatedly. The lens design originates with Max Bray. His terse instructions on the Newport site provide only the sketches of an outline of the actual process but were, nevertheless, quite helpful.  I followed Norm Remer’s excellent book, Making a Refractor Telescope and felt like Norm was my constant companion on the journey. I also referred frequently to Roger Ceragioli’s Refractor Construction Page . The instruction and advice from Roger’s site was incredibly helpful. I also was inspired by Dick Parker’s site along with several others. These are dedicated glass pushers and I cannot express enough appreciation for their wisdom!

I spent a good deal of time making tools like a spherometer, a wedge tester, a thickness gauge and more. These are not trivial tools to make! Luckily I had a nice precision Foucault tester from making my 6 inch mirror many years ago. I made several other helpful little devices for some quick tests as well. I acquired a good 6 inch flat (which was overkill for a 4 inch lens) but necessary for the autocollimation test. I used autocollimation testing as soon as that was possible in the process  and at the very end did some star tests. 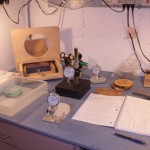 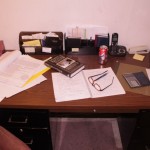 Many Calculations and much research

This was designed as a 4 inch f/14.1 but came out as a 3 ½ inch f/15. How does that work? Well, I made some mistakes. One of them was serious. I went too far with coarse grinding on one of the surfaces. So then what? Throw the project away? Remember, I was interested more in understanding this process rather than the end result. I already own several excellent 4 inch refractors, so I did not need it. I paid more for the blanks and tools than I had for a beautiful finished 4 inch objective! I also learned that a lens design can be scaled to different focal lengths so I could make a shorter focal length lens. I chose that option and from that point I was working on a 4 inch f/13.

Things went pretty well but eventually I noticed that some of the deeper scratches from early grinding were never going to disappear. My lens still has these flaws to this day. And despite them, it works quite well. Newbie amateur astronomers sometimes become obsessed with even a little speck of dust on their lens. Those of us who have been around awhile have seen very good performance from seemingly grossly flawed optics. I have a mirror with a great chunk of glass missing. It works quite well and you would never know it from the view at the eyepiece. The McDonald observatory 107 inch has several bullet holes in it and still does great research to this day. So the scratches in my lens are not esthetically pleasing but they don’t mean much to the performance.

There was another, more serious problem. As with many first mirrors and lenses, the nemesis of a turned down edge reached right out and bit me. No matter, though. You can easily mask that evil edge and have a well figured lens or mirror. The mirror I made many years ago is actually a superb (about 1/20 wave) 5 ¾” mirror! The image is beautiful and will stack up with any six inch reflector.

So I masked out the outer edge of the lens with the bad figure and I now have a fairly good 3 ½” f/15 lens. It’s not as good as my mirror but it will resolve the 4 components of Epsilon Lyrae and show Cassini’s division in the rings of Saturn. These are good tests of this size lens, so I am happy with it, despite the flaws.  The Ronchi lines are “pretty straight” and the out of focus star images show some modest zones, but Galileo would have been delighted to have this telescope! 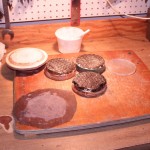 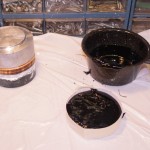 Pouring a fresh lap and pressing another

I finished the lens after about 4 months of serious effort.  There were many up and downs but I am delighted to be able to say after all these years as an ATM that I have finally made a lens. I will probably never make another lens, though. It is just too much work!